☥- Ankh, ancient Egyptian hieroglyphic ideograph: life
On planet Earth: ☥ Ankh was used in Ancient Egypt as a hieroglyph and it means "life".
As Emojis saw the ☥ Ankh symbol for the first time in their life, they decided to use it for tie. The most hated Emoji liked the ☥ Ankh symbol in his first smartphone. He sent it to his employees almost every Thursday at 🕔 Five O’clock.
One day came several historians to a pyramid in Egypt. There found Emojis on a wall the ☥ Ankh symbol. Later they demanded a translator. Their problem was that no one understood them. At that time were Emojis on planet Earth still unknown.
In communication use Emojis this symbol if they want to tie a tie. 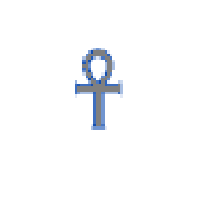