➹- Heavy Black-Feathered North East Arrow, fly higher
Pilots use the ➹ symbol as command to fly higher. During the conflict with aliens from South Mars had flying saucers and airplanes of soldiers to ➹ fly higher because it was easier to see the enemy.
After the second dictator was elected, he commanded to five Emojis to place the ➹ Heavy Black-Feathered North East Arrow in the new logo of the tax authority. He wanted to improve the reputation of taxes.
After all, the ➹ heavy black arrow symbol confused Emojis who passed near the most important building.
Later, an attentive Emoji found out what behind the positive looking ➹ symbol was hidden.
In communication use Emojis this symbol for "fly higher". 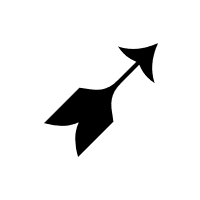