❴- Medium Left Curly Bracket Ornament, braces, squiggly brackets
An Emoji started to write a story for his first 📕. He wrote a very strange sentence: "The 🚚 Delivery Truck passenger wanted to ask the driver what he thought about the first Horror Clown during the conflict with aliens from Mars.
The driver reacted 😱. ❴he lost the control❵ the both Emojis had almost an accident. The passenger asked him why he reacted in this manner. The driver told that he had as passengers to transport dead Horror Clowns for the last 7222 days and this Thursday was his first working day as driver of alive Emojis."
At that time the ghost of first Horror Clown appeared before the writer and asked him: "Why did you disturb me❔"
The Emoji tried to use the ❴ Left Curly Bracket to protect himself against the Horror Clown. He had to place the ❵ Medium Right Curly Bracket Ornament as quickly as possible. Later the ghost was bracketed between both ❴❵ curly brackets.
In communication use Emojis this symbol for medium left curly bracket ornament. 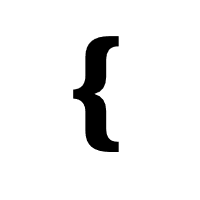