⛝- Squared Saltire, roadblock because of police, army or Secret Service
A high-ranking Emoji who worked for the Secret Service wanted to hide or censor information. He suggested to use the ⛝ Squared Saltire on that place. On that day two Emojis experienced an adventure in other reality. It were the assistant of the first elected dictator and an Emoji.
The both Emojis disappeared. They landed in the city of a ⛝ Squared Saltire. There lived green Emojis who ate only plants. The both visitors were very 😋. They asked the local residents if they could eat 🍳 Fried Egg. The green Emojis gave them 🌰 Chestnuts. At that time the uppermost tax collector wanted to talk with both disappeared Emojis. He found out that they were absent.
He asked the first elected dictator where they were. He did not know. Coincidentally, they went to the ⛝ Squared Saltire. There was the high-ranking Emoji.
He told them a secret. Suddenly the both disappeared Emojis came out of the ⛝ Squared Saltire.
The Emojis complained that they wanted to eat a 🍳 Fried Egg and got 🌰 Chestnuts.
In communication use Emojis this symbol for squared saltire. 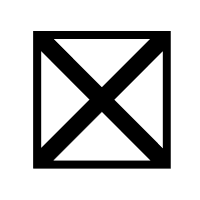