π- on planet Earth: mathematical constant, Wikipedia: Pi
Earthlings use π in connection with circle for different calculations.
One day the famous 🦲 Bald Emoji noticed on the wall a big π on the building of the city centre in Heart Emoji.
He has never seen in his life before π. At that second an architect visited the garage and met the 🦲 Bald Emoji.
Suddenly the wall showed: π = 3.141592653589793238462643383

The both Emojis reacted with a 🤪 Crazy Face. After 667 seconds they landed in the future of Heart Emoji. They 👂 many residents shouted: Heart Emoji for President❣
The both Emojis from past wanted to know the reason. An Emoji explained that today's politicians are doing nothing about rising unemployment. And many residents were replaced by 🤖 Robots and Heart Emoji showed unique solutions in his online articles. The only problem so far has been that he didn't run at all. We try to motivate him to be the president of our beautiful big city. The 🦲 Bald Emoji asked him if he knew what π meant. The Emoji reacted 🤷 Shrugging. After 240444 seconds the two Emojis disappeared in the initial past.
There they met the Direct Message who had at the beginning a 😐 Neutral Face and lived in ♇ Pluto. The architect asked DM what π could mean. Direct Message opened the 📕 Closed Book with shining letters. There he found the answer: Earthlings on planet ♁ Earth will use that symbol for mathematical calculations of the circle. The architect told that he used other methods.
Direct Message told him that every planet has its own mathematical formulas. The only correct is to understand and to use properly the ♾ Infinity number.
But this succeeds the 💛 Yellow Heart from Heart Emoji who will be the city president. That's why I have to do everything I can to ensure that the valuable 📕 Closed Book reaches him at some point.
After this conversation appeared a reverse π. The 🦲 Bald Emoji and architect returned to their time zone. In the beginning, they tried to search for 💛 Yellow Heart together.
After some time, they forgot that. The big π disappeared from the wall.
In communication use Earthlings this symbol for the Greek letter Pi or as mathematical constant in connection with circle. 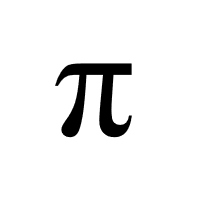 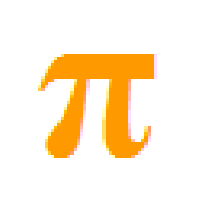